Witness Against the Beast

Christopher Tomlins is the author of In the Matter of Nat Turner: A Speculative History (Princeton University Press, 2020).  He is the Elizabeth Josselyn Boalt Professor of Law at the University of California, Berkeley, and an affiliated research professor at the American Bar Foundation, Chicago.  His many books include Freedom Bound: Law, Labor, and Civic Identity in Colonizing English America, 1580–1865; Law, Labor, and Ideology in the Early American Republic.; and The State and the Unions: Labor Relations, Law, and the Organized Labor Movement in America. 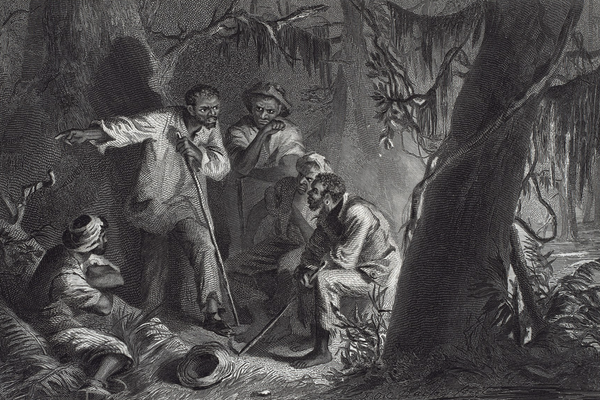 Donald Trump, June 1st, 2020.  Washington DC.  A large, powerful, white man, brandishing a bible like a billy club, in aggressive repudiation of all those who demand he acknowledge the death of George Floyd at the hands of Minneapolis police, and the endemic racism of contemporary America to which Floyd’s death and the deaths of countless others stands witness.  The image is unforgettable.  What does it mean for America’s evangelical Christians, to whom it is directed?

“I thought, look at my president!  He’s establishing the Lord’s kingdom in the world,” says Benjamin Horbowy, 37, of Tallahassee, Florida, in response to Trump’s June 1st photo-op.  “I believe this is a president who wears the full armor of God” (Guardian 3 June 2020).

I have no reason to doubt the sincerity of Mr. Horbowy’s beliefs.  Still, I ask him and those like him to examine their convictions very carefully.  Why?

There is another bible on display just a few blocks from the spot on which Trump stood, in the National Museum of African American History and Culture; a bible, unlike Trump’s, that is open not closed, worn and torn through long use, not pristine; a bible fragile with age, and sweat, and suffering.  It is Nat Turner’s bible.  Like Trump’s bible, it too stands for the power of evangelical Christianity, but it marshals that Christianity in defiance of profane white dominion rather than in defense of it.

Nat Turner was a Virginia slave who, in August 1831, led a bloody uprising that resulted in the deaths of 55 white and 44 black people.  Aside from the rebellion that bears his name, Nat Turner is best known for being unknowable, “the most famous, least-known person in American history.”  But this is not entirely true.  We know more of Turner than of virtually any other African American slave of his time, thanks to the remarkable Confessions of Nat Turner, a pamphlet composed by a local Virginia attorney, Thomas Ruffin Gray.  Gray based his pamphlet on an extended conversation he had with Turner in the days prior to Turner’s trial (for conspiring to rebel and making insurrection) and his inevitable execution, “hanged by the neck.”

Fifty years ago, at the height of the civil rights movement, William Styron published a fictional account of Turner and his rebellion that drew in part on Gray’s Confessions.  Styron wanted to make the man and his motives comprehensible.  But Styron had no real desire to understand Turner on any terms but his own.  The historical Turner, Styron believed, was “a religious maniac,” and this was a figure with whom he wished to have nothing to do.  Historians, too, have secularized Turner.  Eugene Genovese, the late historian of slavery, thought Turner deserved “an honored place in our history” because he had “led a slave revolt under extremely difficult conditions.”  But the same Genovese derided Turner as a madman, a religious fanatic, “who had no idea of where he was leading his men or what they would do when they got there.”

Through the scribbles of his “confessor,” Turner left us an invaluable account of himself – deeply Christian, deeply evangelical, moved to act by an extraordinary faith that drove his apocalyptic thinking all the way from the squalor of his life as a slave in Southampton County to Christ’s Crucifixion, and onward, to the Second Coming and the Last Judgment.

This Turner, who spoke plainly about himself, without disguise, has been turned into a shrouded mystery because we refuse to pay attention to what he actually said.  But once we penetrate the fog of misdescription and incomprehension we find that Nat Turner’s defiance of the profane and degenerate regime of Southampton County slaveholders was rooted in the deep marrow of his evangelical religious ideation.  That deep marrow gave him the strength to endure, the knowledge to understand, and the weapons with which to fight.  It gave him the power to witness against the beast, to reveal in prophecy, and to seek redemption – for all.

200 years on, America’s white evangelicals find themselves allied with the successor of that profane slaveholder regime against which Turner fought – a successor regime of race hatred and white supremacy.  Like it or not, they are in alliance with the beast.  For the sake of their own souls, they would do well to reconsider.